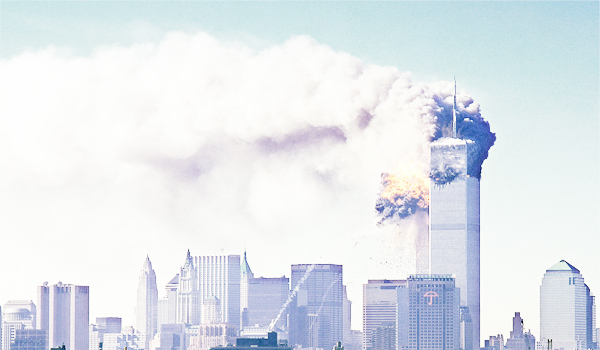 It was a rainy evening in New York City on Monday, September 10, 2001. My wife and I were in town for business but had enjoyed the opportunity to do some sight-seeing and get a taste for Manhattan’s wonderful diversity of food, scenery, and arts.

We bought umbrellas and a rain jacket at Pier 17, hotdogs and Broadway tickets in Time Square, before eventually taking in The Phantom of the Opera that night. Afterward, we took the subway to our hotel — just across the water from, but in sight of, the World Trade Center.

I don’t know why my alarm clock didn’t go off, allowing me to get up early and head to the Twin Towers for sight-seeing — but it didn’t.

By the time we finally got back to our room it was already late, but I stayed up even later poring over a walking map of Manhattan and planning the next day’s activities for myself, since my wife was obligated for most of the day with meetings. I carefully mapped out my strategy, which would begin with an early visit to the Twin Towers’ sight-seeing deck, in order to get a bird’s eye view of all of New York.

Exhausted, but looking forward to seeing more of the city on the morrow, I set the hotel alarm clock and fell immediately to sleep…

To this day, I don’t know why my alarm clock didn’t go off, allowing me to get up early and head to the Twin Towers for sight-seeing — but it didn’t.

So, instead of waking up early, I finally got up just before 9:00 a.m. and turned on the TV as I got dressed. I could not believe my eyes. One of the Twin Towers was on fire! And very soon after, along with the rest of the United States, I watched in horror as the second tower was struck by a second airplane.

Soon afterward, my wife came rushing in the door in a panic, because she had known of my plans to go into the city that day. We went to the top of our building, where we could see the towers burning from the windows of our deserted hotel restaurant. We wept in our room as we watched both towers collapse a little while later.

We wept again as we watched President George W. Bush quoting the 23rd Psalm in order to comfort and re-center a shocked and mourning nation. And all that followed in the coming hours and days — walking through deserted streets, observing haggard and pale faces, scheduling and rescheduling flights without success, and eventually taking a taxi an hour-and-a-half away in order to find a rental car to drive back home — was just one of millions of American stories surrounding a day we will never forget.

All along the highway, from New York to Memphis, electronic traffic signs were emblazoned with the prayer: “God bless America.” And He has.

Every day is truly a gift, whether we realize it at the time or not.

As I look back now, years later, it amazes me to think of the depths of sorrow that we all experienced during that time. And, yet, it is equally amazing, and inspiring, to the think of all the deliverances and all the joys that have been experienced since. It reminds me that, indeed, God is still on the throne even when our world is shaken to its very roots and all that we know comes crashing down in a matter of moments.

It reminds me to put my trust in Him, because God is the only unchanging and invincibly good thing this world will ever know. And it reminds me that every day is truly a gift, whether we realize it at the time or not, and so ought to be used for the glory of our Lord and Savior Jesus Christ.