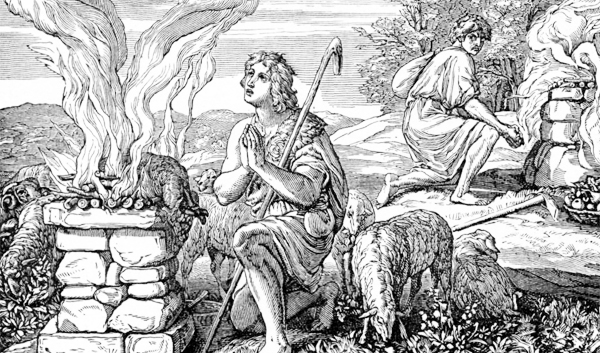 In the course of time Cain brought to the Lord an offering of the fruit of the ground, and Abel also brought of the firstborn of his flock and of their fat portions. And the Lord had regard for Abel and his offering, but for Cain and his offering he had no regard. So Cain was very angry, and his face fell (Genesis 4:3-5).

Just one chapter after the fall, and just one generation from Adam and Eve, we already see the beginning of false religion. And we see how dangerous, self-deceptive, and disappointing it is!

Notice this: Cain was worshiping. Cain was sacrificing; his religion was costing him. Cain was even offering sacrifice to the one true God! Yet God did not accept his offering.

How can we know that our worship, our service is acceptable to God?

There could not be a more relevant, urgent consideration for us as Christians. You and I are going to church; we are listening to sermons; we are singing worship songs; we perhaps are even giving to God generously and sacrificially of our finances. But how do we know that our worship, our service is acceptable to God? We can do all these things and still be just like Cain. And if so God does not consider any of our efforts as acceptable or pleasing to him.

At the same time, while all this is going on with Cain, Abel is also worshiping. And Abel is sacrificing; his religion is costing him. And Abel’s offering is to the one true God. Yet Abel’s worship, unlike Cain’s, is accepted!

What makes the difference? How can we know that our religious efforts are acceptable to our Creator God?

The difference does not seem to lie in when the offering occurred, in how much was offered, or even in what was offered. Both Cain and Abel gave from what they had: Cain a farmer, and Abel a shepherd. Neither occupation is inherently good or bad; in fact, God himself is described in the Bible as a farmer and as a shepherd.

Faith Is the Difference

What makes the difference between Cain and Abel’s worship? The writer of Hebrews, in the New Testament, provides this divine commentary: “By faith Abel offered to God a more acceptable sacrifice than Cain, through which he was commended as righteous, God commending him by accepting his gifts. And through his faith, though he died, he still speaks” (Hebrews 11:4).

True, biblical faith rests in, believes in God and his promised way of salvation.

Faith is what made the difference. True, biblical faith rests in, believes in God and his promised way of salvation. False faith knows God exists, but is trusting ultimately in something or someone else. Abel offered to God because he trusted in God for his salvation; Cain did not.

Was Cain trusting in the value of his own work or worship to make him pleasing to God? Was he just going through the motions of offering but not really caring? We don’t know exactly what was going on in Cain’s heart; but we know that his sacrificial, outwardly impressive religion was not exercised in true faith and so therefore was not acceptable to God at all!

The writer of Hebrews goes on to describe other Old Testament believers who were of the same faith as Abel, and says: “These all died in faith, not having received the things promised, but having seen them and greeted them from afar, and having acknowledged that they were strangers and exiles on the earth” (Hebrews 11:13).

The only way our worship today, or any day, is acceptable to God is through faith in Jesus Christ.

Considering the implication of Cain’s false religion for us, it is appropriate to ask: what brings us to church, or to our acts of Christian service, today? Are we just wanting to keep up appearances in front of friends or family? Are we trying to assuage the sense of guilt we feel as the undeniable sinners we are? Are we actually impressing ourselves with the solid, dependable, orthodox nature of our years-long Christian service?

From faithful Abel we learn that the only acceptable service to God is service that is trusting in God and his promised way of salvation.

Looking backward, from the New Testament era, God has made it plain to the world that Jesus Christ is the promised descendant of Eve, who through his once-for-all sacrifice on the cross has crushed sin and the serpent under his heel.

The only way our worship today, or any day, is acceptable to God is through faith in Jesus Christ. Anything else is just another false religion and no more pleasing to God than Cain’s offering was.