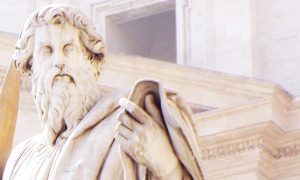 I am the least of the apostles, unworthy to be called an apostle, because I persecuted the church of God. But by the grace of God I am what I am, and his grace toward me was not in vain. On the contrary, I worked harder than any of them, though it was not I, but the grace of God that is with me (1 Corinthians 15:9-10).

Here we see one of several little windows from the New Testament into Paul’s very human struggles with his past. While he was completely resting in Christ’s work on the cross, dying for his sins, he never forgot the fact that he had once persecuted and tortured Christians.

If perhaps you have fallen as a professing Christian, have denied the gospel by your words or actions, have made a total mess of things – recently or in the past – do not despair. The Christian gospel is not just about faithful believers; it is about a faithful Savior named Jesus. Jesus Christ gives faith to believers in the first place and then continually draws them to himself in repentance, faith, and forgiveness. Paul himself had to rest in God’s gracious forgiveness in Jesus Christ.

The Christian gospel is not just about faithful believers; it is about a faithful Savior named Jesus.

“But by the grace of God I am what I am…” Paul had to, just like you and I have to, run back to God again and again for the grace he needed to live joyfully and faithfully, despite his many regrets. It was the resurrected Jesus meeting me in person who made me a Christian in the first place, Paul says, and it is Jesus continued grace that keeps me a Christian!

“…and his grace toward me was not in vain.” On the contrary, I worked harder than anyone, though it was not I, but the grace of God that is with me. This is not a proud statement at all. Remember Jesus’ words that the one who would be greatest in his kingdom would not be chief of all, but be servant of all.

Paul is simply acknowledging what Jesus had told him immediately following his conversion, concerning Jesus’ purpose for his future ministry: “[Paul] is a chosen instrument of mine to carry my name before the Gentiles and kings and the children of Israel. For I will show him how much he must suffer for the sake of my name” (Acts 9:15-16). Paul labored abundantly in that he followed where Christ led him, perhaps suffering and sacrificing more than any other apostle for the sake of Jesus, eventually even beheaded by Nero on account of his Savior’s message.

The gracious God who had transformed his life deserved his service.

What about you? Has your life been transformed by the grace of God in Jesus Christ? If so, your labor for him should reflect the grace you have received from him!