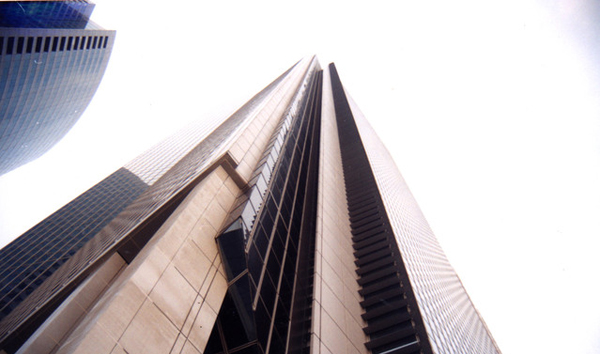 Then they said, “Come, let us build ourselves a city and a tower with its top in the heavens, and let us make a name for ourselves, lest we be dispersed over the face of the whole earth” (Genesis 11:4).

The great sin of the city of Babel is not tower-building, or unified labor toward a societal goal. The sin of Babel is the sin of seeking independence from God.

The Strength of Humanity

The tower-building endeavor, we are specifically told, was an enterprise in self-sufficiency, in proud self-confidence: “let us make a name for ourselves” is their ultimate motivation and goal. And all this so that they would not have to disperse (as God had commanded in Genesis 9:1), but rather find strength in their numbers.

Here at Babel there was such confidence in their social vision, their organizational ability, and their technological accomplishments that they feel sure of their success as a society. Does that sound familiar? This spirit has existed in every culture, in every age, since. Their “bricks” are our iPads, medical care, universities, political system.

While the specific technology may have changed, the underlying problem has not.

The Answer from God

However, in verse 5, we are told that, “the Lord came down to see the city and the tower.” This of course is metaphorical language, because the omniscient, omnipresent God never has to physically “come down” to earth, like humans travel, in order to investigate events. But there is more than just metaphor here: there is also obvious irony. The goal of Babel’s people was to build a tower that would reach up to heaven, yet God has to bend down, as it were, to look at their little tinker-toy project!

So in verses 7-9, God disperses the people of Babel over the face of the earth. In a total turnaround, the rebellion of Babel in order to accomplish significance and security results in the opposite. Rather than making a name for themselves, they are dispersed into relative obscurity; rather than achieving unified power, they are confounded with one simple action from God.

As God confuses their languages, they cannot even understand each other, so who will talk about how great their name is? They cannot even communicate, so their unified rebellion becomes complete alienation from each other.

From one of the most unified rebellions against God in all of human history, we learn this invaluable and immutable lesson: man’s greatest wisdom is foolishness to God. Man’s greatest strength is weakness to God. God is not impressed with our technological advancements, our academic accomplishments, or our political maneuvering.

God knows what we sometimes have to learn over and over again: we are strongest when we are most dependent on God. We are wisest when we rely on God’s wisdom rather than our own. We are most successful when we are striving for God’s purposes, not our own.